The most clever injector

Home / The most clever injector 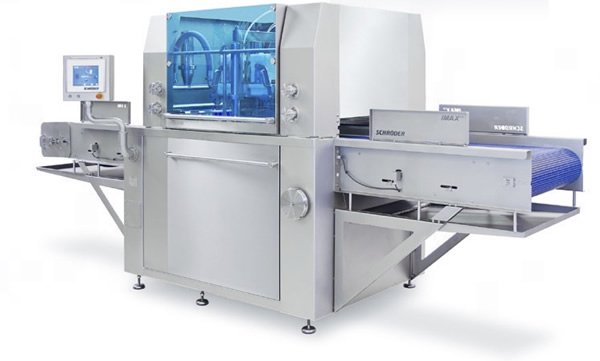 Schröder Maschinenbau is a specialist in injection technology. Because of the company’s long lasting experience, the specialists have been conducting extensive basic research in the past years. A result of these efforts is the IMAX IT.
For the company’s research efforts Schröder Maschinenbau closely works with the
Faculty of meat technology at the university OWL and also with the Chair of fluid mechanics at the faculty of mechanical engineering.

The result: the IMAX IT

After 20 months of research and construction efforts, the IMAX IT was developed. This injector is equipped with a weighing system that allows for continuous control of injection accuracy. The injector is able to automatically adjust the amount of brine injected. Further- more, the machine is adaptive i.e. it evaluates the settings on its own and safes the data which is then available to improve settings in case of repeating batches.

The system has the following technical specifications: The loading cells providing the weighing signals are specially chosen types of weighers that up to now have not yet been applied in the meat processing industry. These cells are very robust and fully enclosed by a stainless steel block. The weigher is part of the statical construction and in principle reacts to the material de- formation of the supporting construction. This principle lead to the development of a weigher model that suits the environment in the meat processing industry – it can be washed down and withstand mechanical stress such as hits.

The weighing signals are evaluated by a newly developed software. The computer used for this purpose is built as a separate unit making the injection process safer.
The software continuously records and processes the collected data. During start-up of the ma- chine the increased brine saturation of the belts is recognized as special “background static“ which is characterized by a particular curve and excluded from further evaluations. Every second the result of the comparative evaluation is sent as a signal to the injector control which then draws its own “conclusions“ from the data. The injector automatically adjusts target and actual injection rates.